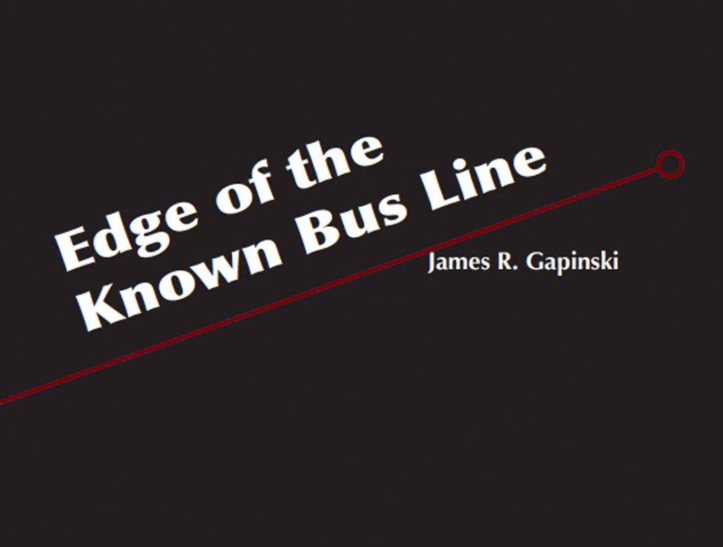 In 1972, horror master Kazuo Umezu created one of the strangest horror manga of all time: The Drifting Classroom. This manga follows a group of school children as their school is suddenly transported to a terrifying dystopia. Everything quickly devolves into shit as the kids find themselves trying to build a new society in what is basically hell. It is one of my favorite series, and I haven’t read anything like it until now.

My latest eARC from LibraryThing, James R. Gapinski’s Edge of the Known Bus Line, takes a very similar “thrust into dystopia” route. Our unnamed narrator is taking the morning bus to her deli job when her bus driver takes a strange, off-course turn. When questioned about this, the bus driver pulls out a gun. After much confusion, she and the other passengers are dropped off in Out of Service, a creepy shanty town in the middle of nowhere with no clean water or anything else other than rats, venomous spiders, and very unsanitary people.

The origin and location of Out Of Service are never explained, but it’s a nightmare landscape rich with desolate imagery and its own cultures and religions. The people are divided into factions, each named after a city where they believe a bus will eventually take them to. The dominant one is the Chicago Faction; the narrator makes waves when she refuses to join them.

This novella is a quick-paced surreal horror with a dash of dark humor. The narrator’s interaction with the strange folks of the Cleveland Faction, who are literal hill people, is darkly hilarious and the highlight of the novel. The narrator’s foul, sarcastic voice makes the visuals of Out of Service both more visceral and less boring; these are people living in their own filth, with nothing to fill their days. The way the narrator describes the situation makes it feel significantly less dull.

There are plenty of issues with this novella, largely revolving around the characters. The narrator intentionally distances herself from those around her, which means we don’t get to learn much about them. But we also don’t learn much about the main character. We know she’s had a rough past, but it doesn’t always match up with her reactions to things. Her detachment to people and names are explained shallowly, in a comparison between pigs and people…although there are many hints this may be due to her being a victim of domestic violence – because of course she is. Strong female characters are always survivors of abusive men, apparently.

There’s also the matter of her age/health. I think nothing would’ve been lost turning this character into a man; Gapinski doesn’t seem to know how to deal with the practical, sanitary issues a cis woman would deal with in a dystopia – in particular, menstruation. He deals with it by just…not. He makes our narrator post-menopausal, which implies that she’s in her early to-mid fifties. However, she shows no physical constraints that any person would have in that age range. Even after being in hell for over a month, she’s able to physically fight off people and run around. Also – and I hate to use this term, because I am one – she speaks like a millennial. I have worked with and around countless women her age, and while plenty of them swear, none of them talk like her. Like I said before, I love the narrator’s voice, but that voice isn’t actually HERS.

What I’m getting at is the narrator is basically a cis millennial man, except with lopsided tits, panties, menopause, and the experience of being abused by a man for the sake of character development.

Our nameless narrator doesn’t grow in any way, which is fine! I don’t believe that a character has to grow in order to be good. However, I would expect some sort of change in a strong-willed person trapped in a terrifying situation. After countless escape attempts, I expected a breakdown. None came. I expected some sort of self-reflection in which she may not have taken her own advice but still acknowledged why she does the shitty things that she does (such as compare humans to pigs on a daily basis). I doubt that it would have affected the pacing if these things were done, and I think it would have added greater dimension to the story.

As a horror story, it relies heavily on gross depictions of unsanitary humans and cannibalism. It also relies on a persistent feeling of despair. The despair and grossness are both believable, given the setting. While Gapinski does a good job predicting what would humans would probably do in such a horrible situation, it feels shallow. I would’ve love to have seen more beyond the repeated descriptions of how unclean the people are, or how gross rats are to eat.